Boss Rush: A Shmup that the Exact Opposite of What You Think it is

As much as I like shmups, there is a certain point when they all start to blend together. It doesn't help that most recent entries into the genre are all bullet hell games.

Don't get me wrong, I like the challenge of weaving through a massive wall of bullets.  It's just that I like some variety to my shmup palette.  Which is why an indie game called Boss Rush seems so appealing to me. 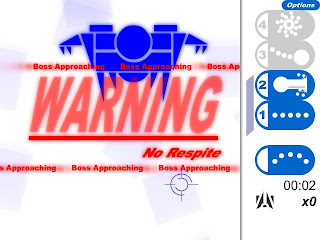 The warning messages are a nice touch

Now looking at the above image you might be thinking, "So what?  The game looks like every shmup ever."  This would be true except that you're not playing as the lightly armed (and even more lightly armored) ship trying to kill the giant boss armed with more guns then god.  No, you're controlling actually the boss and using your excessive firepower to swat the annoying fighter that's trying to paper cut you to death.


It's such a neat and obvious inversion of the tradition shmup formula that I'm surprised no one's really done before.  The only other game I can think of that attempted anything similar was an obscure arcade game (even by my standards) by Sammy called Change Air Blade, and there you could only temporarily control a boss in the game's versus mode.

While the game is technically done it hasn't been released yet since the developer is looking for a sponsor.  Hopefully the developers will get a deal soon, because I'd love to be able to play the full game.

Paper Dino via A Little Bit on the Awesome Side
Posted by Unknown at 4:58 PM No comments: Links to this post